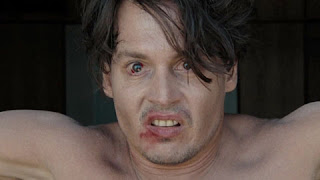 The best works of writer Hunter S. Thompson adhere to a simple three-step pattern. Step 1: Thompson is assigned by an editor to report on some regional oddity (an election primary, a motorcycle race, the Kentucky Derby). Step 2: Thompson soaks his psyche in booze and pills until the topic he was meant to cover is a hazy blur backgrounding a detailed account of his own debauchery. Step 3: Said booze and pills continue twisting the lens of the coverage until it’s back on the original topic itself, which provides a funhouse mirror view of it that generates a strikingly unique set of insights.

Steps 1 and 2 are relatively easy – it’s that third step that made Thompson a journalistic legend, and it’s that step which is unfortunately lacking in Bruce Robinson’s adaptation of Thompson’s The Rum Diary. In fairness, that book was an embryonic version of Thompson’s style, a debut novel which went unpublished until 1998. But Robinson and producer/star Johnny Depp have made their a movie version a sort of tribute to the idea of Thompson himself, which makes it all the more strange that this booze-soaked story seems oddly sober on screen.

Thompson’s loosely autobiographical novel follows a young reporter (Depp) newly arrived in Puerto Rico who runs up against apathetic editors (Richard Jenkins), drunken colleagues (Michael Rispoli, Giovanni Ribisi), and land developers (Aaron Eckhart) exploiting the locals. A number of big ideas are floating around the story – the ravages of economic imperialism, the birth of a reporter’s moral consciousness, the unique clash of “American-ness” and native identity in Puerto Rico – but they’re mostly just hinted at in the loose plot here, with the focus instead on its characters shambling through gags like experimentation with homebrewed “470 proof” alcohol and slapstick car chases.

This isn’t an awful thing, since Depp and company are the kind of actors that are consistently watchable even with a lackadaisical plot and a somewhat low joke hit/miss ratio, and also because the movie is ham-fisted when it comes to anything more substantial. This is, after all, the kind of movie that abstractly deplores insults to the dignity of the native population and then proceeds to only feature Puerto Rican characters as cockfighting enthusiasts and witch doctors – and the sloppy non-ending here is painfully pat and weirdly out of touch with where Thompson’s work would eventually go.

It’s pretty clear that the only reason this movie really exists is Depp, who was a close friend of Thompson’s and has spent much of his career paying homage to the man, whether by playing Thompson himself (Fear and Loathing in Las Vegas), narrating a documentary about him (Gonzo), or paying for his funeral service (a fireworks display where his ashes were fired out of a cannon). But if Depp isn’t exactly bad in the film, his performance seems somewhat half-hearted. His understated facial expressions and deadpan vocal delivery work for the part, but they lack the kind of inventiveness and eccentricity that made Depp’s name in the past. It’s clear that the actor means well, but it seems like he ought to have tried harder, which happens to be a pretty apt description of the entire film around him.